On a universal level, these boxed collages are a response to the victims of war. I was especially thinking about the vets who are returning home wounded, on so many levels, from the Iraq war. We have created another generation of war veterans who will need a lot of help to be able to return to their former lives here, if that is possible. We have destroyed many lives and many families through the war. At a more personal level, they are a response to a minor injury that sent me to the hospital for a week. They day before I injured myself, I was in my back yard working in the garden. I heard a loud racket out front. I went to investigate. Several crows were attacking a robin’s nest, and the robins were trying to fend them off. In the middle of the street I came upon a large crow with a a bright blue robin’s egg in it’s beak. A startlingly beautiful image. The inky black sheen of the crow set off by that bright blue egg against a grey street. It stopped me. After I took this visual in, I shooed the crow away and the others flew off with it–egg still in it’s beak.

That afternoon I cut my finger in my studio and needed a few stitches. A week later I had a swollen hand and a massive infection. I had to be hospitalized and hooked up to some IV antibiotics.There was a lot of coverage of the war on TV at the time. I had also been reading some newspaper articles on the returning wounded vets and the mental health of our armed forces. The news was grim. As I watched some of the coverage, I sat there thinking about the crows and the robins. I couldn’t get that image out of my head. What did those birds symbolize?

When I was released, I did some research. Robins are considered to be symbols of compassion. I found 2 stories that described how they got their red breasts. One tells of a robin plucking out a thorn from Christ’s forehead as he was nailed to the cross. The thorn dripped blood on the robin’s breast and stained it red permanently. The other tells the story of robins carrying small buckets of water to the parched souls in hell. Their breast feathers got singed from the flames in hell and colored them red. Crows, almost universally, are considered to be symbols of a bad omen. A bearer of bad news. The one exception is in Japanese shintoism. They are the messengers of the gods.

I thought this duality of symbols was interesting and provocative. Almost perfect, really for what I had been thinking about. The robin symbolizes compassion and by extension, healing. The crow is a symbol of a bad omen or the bearer of bad news, which could include being hurt or wounded. I was thinking a lot about what it means to be wounded. How do we heal? What heals? What needs aid? I was also thinking about the archetypes of the wounded warrior and the wounded healer. As I pondered all this, I began to assemble materials and images. I was going to Paris for a month, and I intended to make work while I was living there. Though I usually work more in a 3D vein, I knew I would have to work flat so I could travel easily with the materials I needed to bring with me, as well as easily get the work back to the U.S. I decided I would make flat collages and then box them when I returned.

I knew I had an early 20th century health book that had pictures of first aid and bandagings. Those images became one of my visual starting points. Next I began to scavenge for old first aid kits, images of crows and robins, old fortune telling cards with good and bad fortunes, male paper dolls. I added to these with paper ephemera I found in Paris. I also printed a series of photos I had taken of my hand as the wounds healed. I made many digital copies of robins and crows. I also was looking for anything robin’s egg blue, or the orangey-red color of the robin’s breast. I knew I wanted to use those colors with the black of the crow as my color palette.

That was my starting point. I ended up making 8 diptychs. I put them in hinged boxes that were stained robin’s breast red. They were meant to be like a portable altar or shrine that was popular during medieval times. They are about The Wounded. 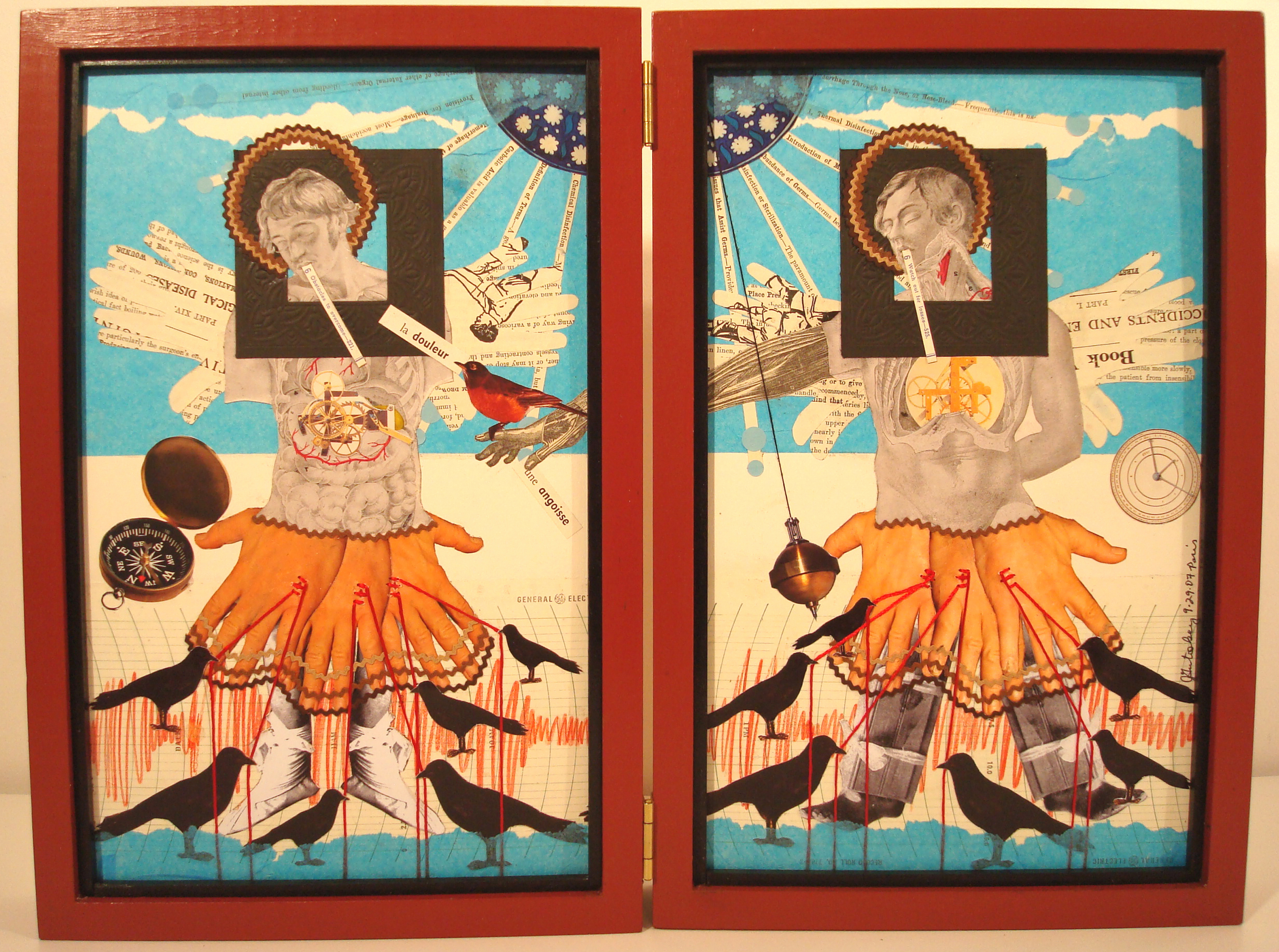 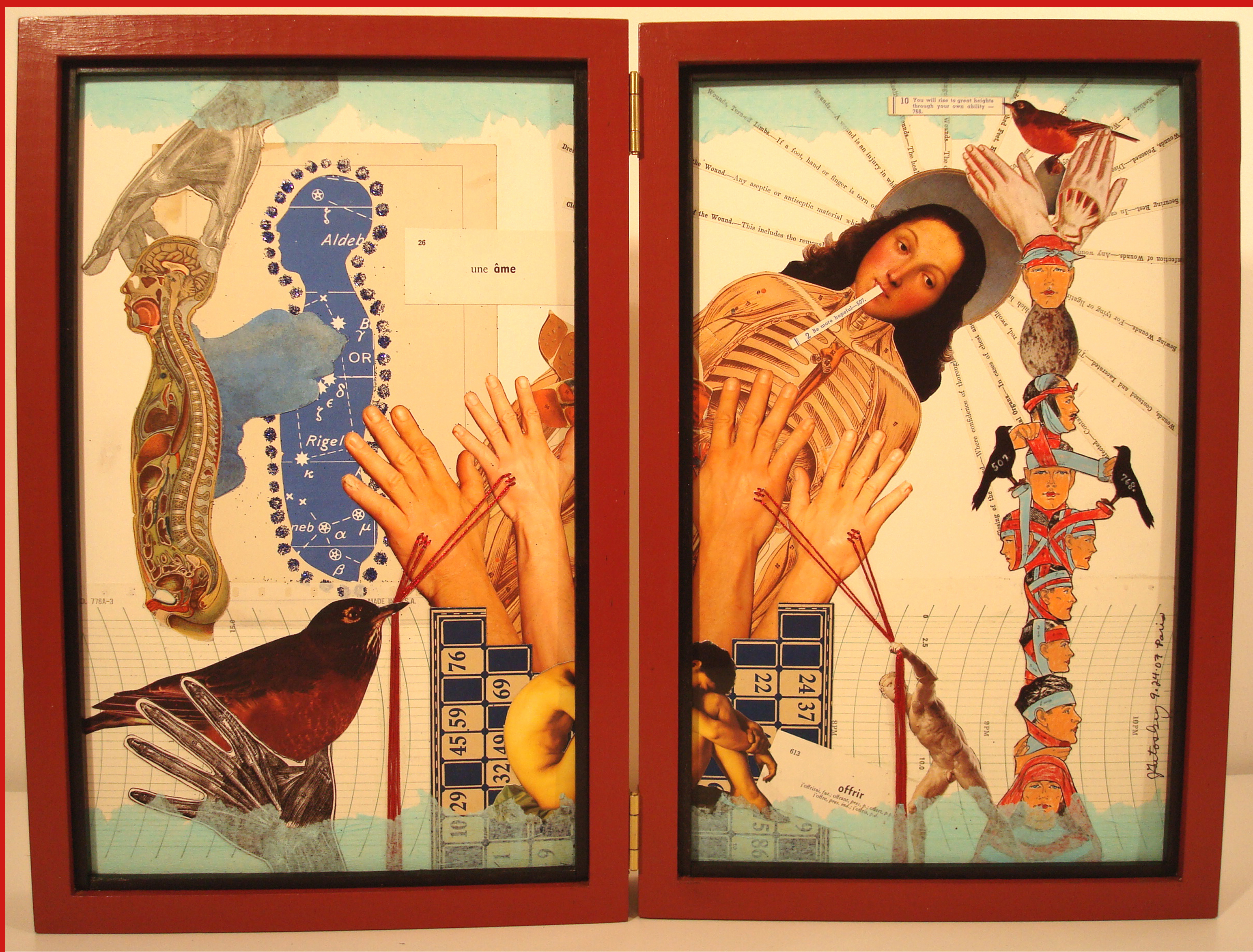 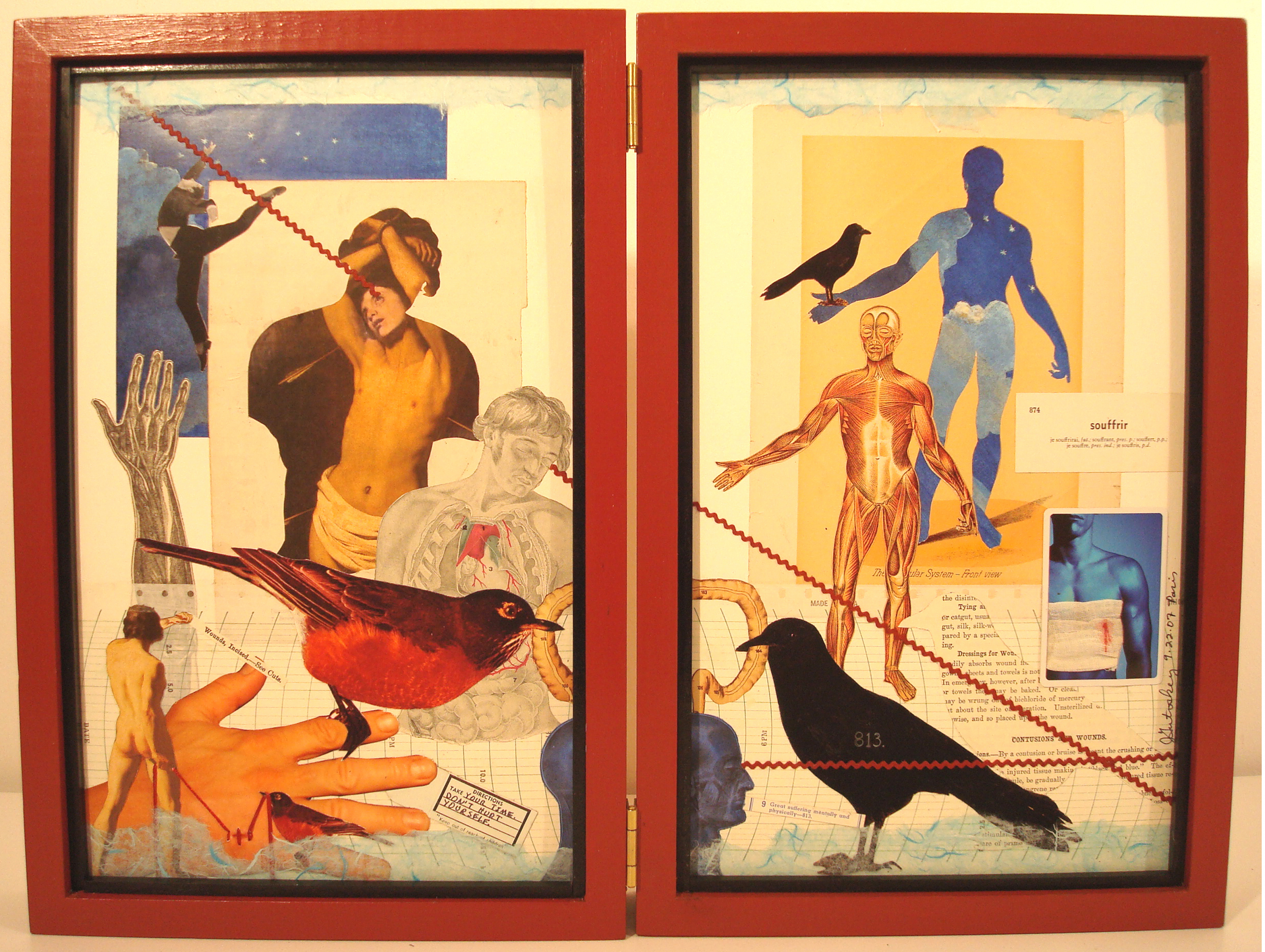 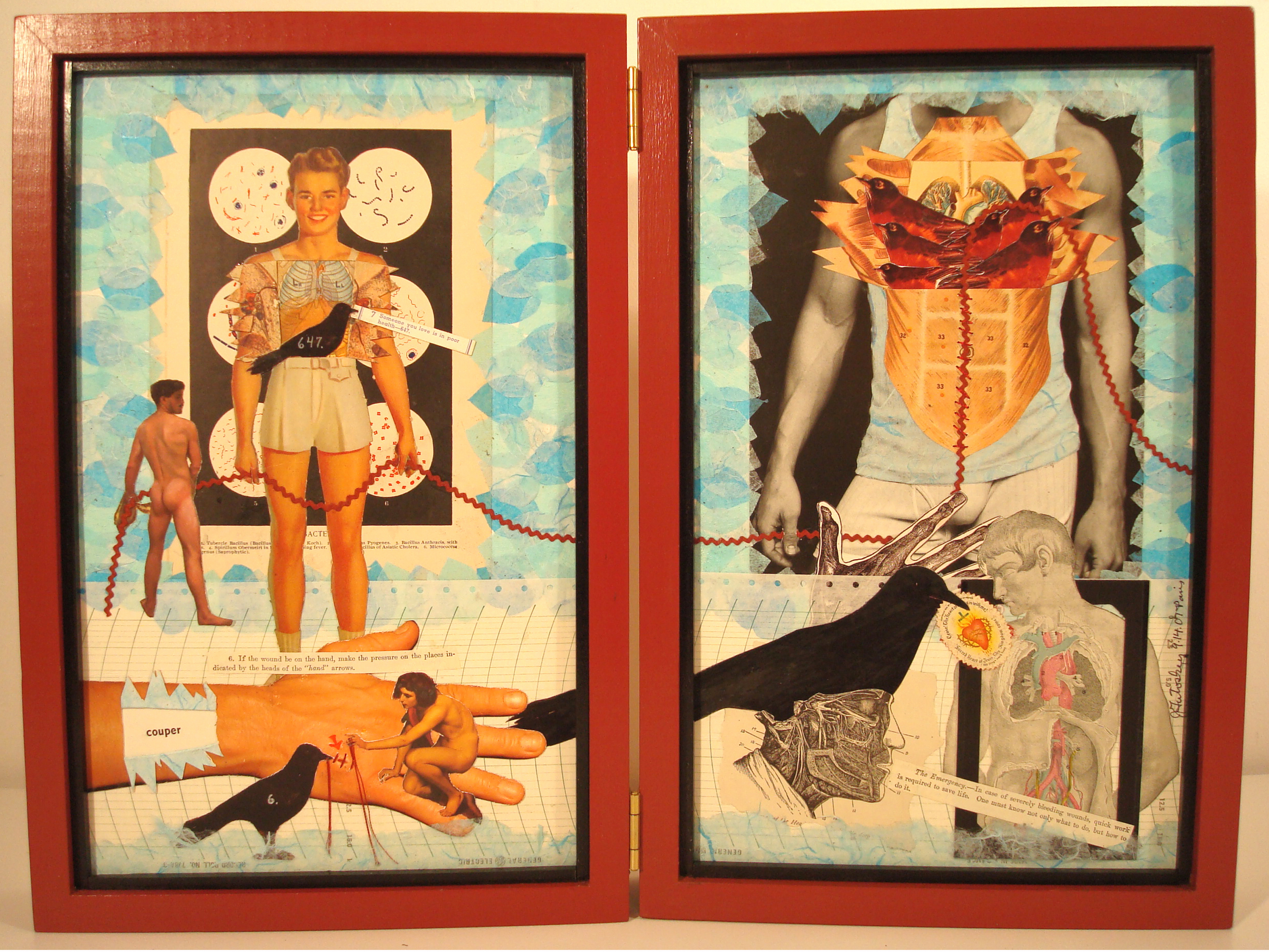 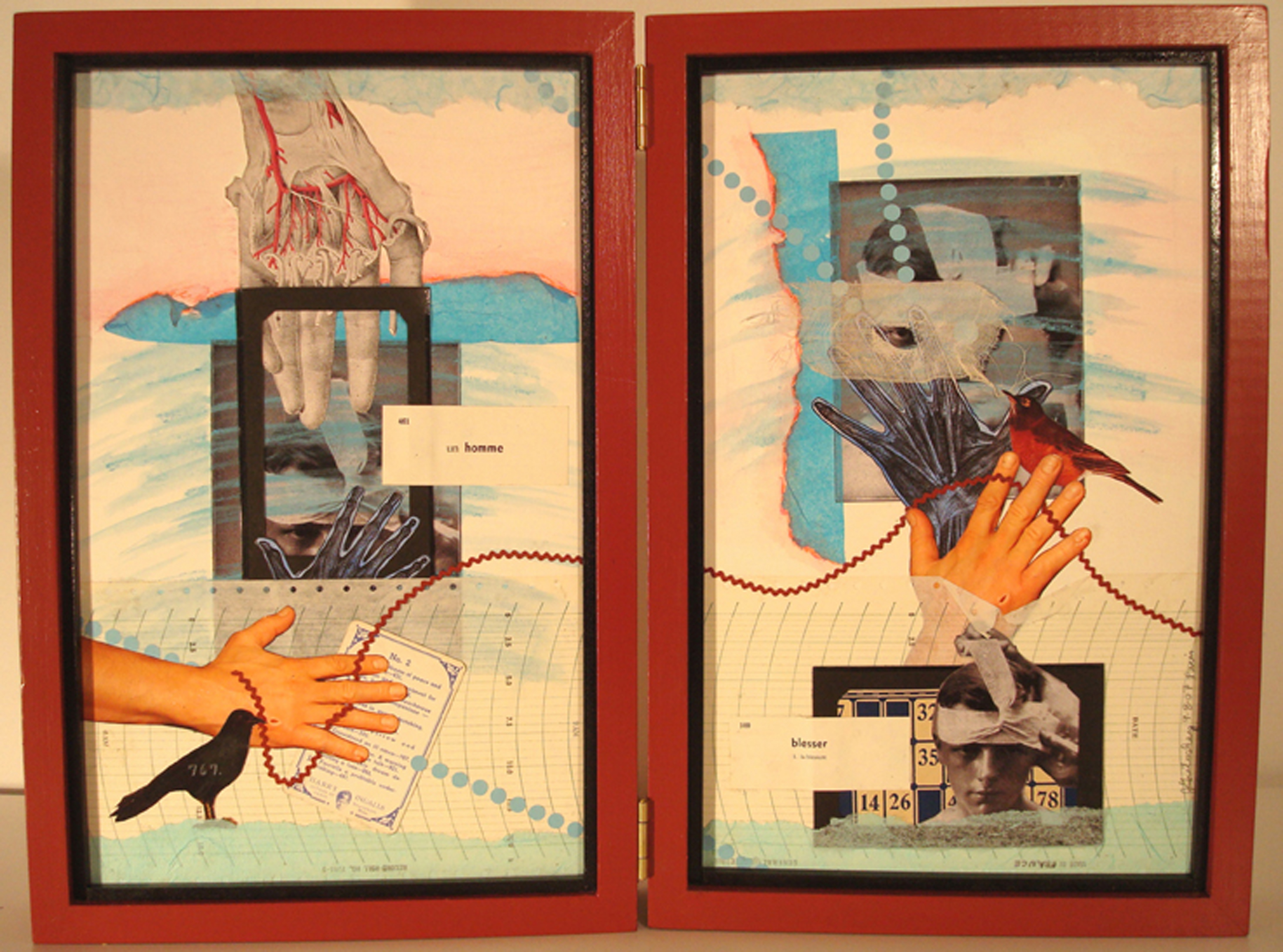 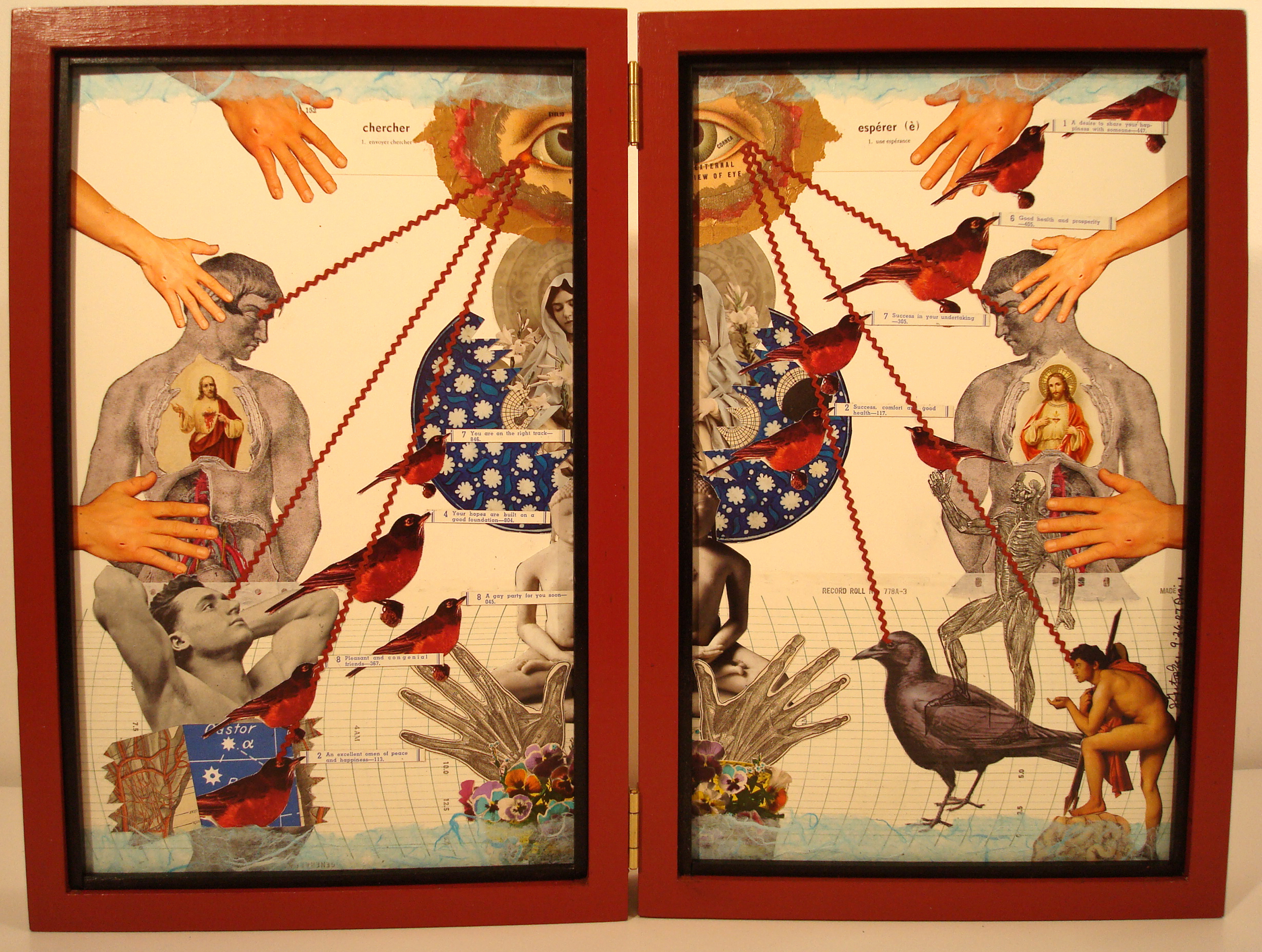