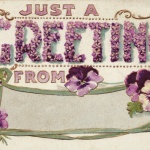 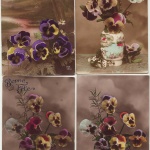 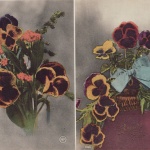 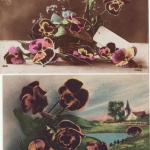 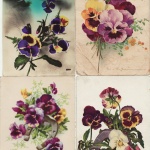 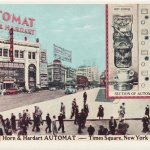 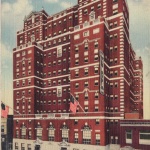 A selection of French pansy postcards I found during my travels at several different Parisian flea markets.  I have collected old postcard images of pansies for years, mostly because of the use of the word “pansy” as slang  for a gay or queer man—especially a flamboyant gay man. I became aware of the Pansy Craze of the 1920’s, and I did some research and wrote a paper about it. I used found paper ephemera that I located and bought on eBay that had some connection to the time period of the Pansy Craze in NYC during the late 1920’s and early 1930’s as a way to reconstruct or reconstitute the spaces where the Pansy Craze took place. (The last two postcards above are examples of Pansy Craze-related paper ephemera which I found on eBay.) The following is excerpted from that paper, “Gay Spaces, and Paper Traces.”

Horn & Hardart and Childs were the two major chains of cafeterias, automats, and restaurants in NYC. The automats, or cafeterias, appeared in the late nineteenth century in New York City. These cheap dining facilities began to grow in number during the beginning of the 20th century in response to the growing number of single men, including gay men, who were both working in NYC and living there in rooming houses. Most of them had no access to kitchens to make their own meals, and the cheapness and convenience of the automats and cafeterias made them popular with these single men. By the 1920’s, the cafeterias and automats were increasing more rapidly in number, especially after Prohibition forced the closure of many small restaurants whose profits had largely depended on the now illegal  liquor sales. “Automats were among the safest refuges available to poorer gay men. They became even more secure during the Depression, when their rock-bottom prices and lack of supervision gave them a reputation for social outcasts and the unemployed” (Chauncey 165).

The cafeterias became social centers for many of the less affluent gay men, and a place where new arrivals to NYC could gain entrance to the gay community. “Some of these cafeterias, Automats, and lunchrooms catered to a gay clientele, while others were simply taken over by gay men, who were allowed to remain so long as they increased business without drawing the attention of the police” (Chauncey 165). The Child’s Restaurant in the Paramount Building and the Horn and Hardart Automat in Times Square were both famous as “fairy or pansy hangouts” where more flamboyant behavior was tolerated. “Gay men quickly spread the word about which restaurants and cafeterias would let them gather without guarding their behavior. Several Child’s cafeterias and restaurants located in heavily gay neighborhoods became known among  gay men as meeting places; indeed, the campy antics of the more flamboyant among them became part of the draw for other customers. One gay man who lived in the city in the late 1920’s recalled that the Child’s restaurant in the Paramount Theater Building on Broadway at 43rd was regularly “taken over” by “hundreds” of gay men after midnight” (Chauncey 166).

The William Sloane House Y.M.C.A. on West 34th Street New York, N.Y. had a reputation for being one of the gayest  Y.M.C.A.’s in New York City. This was particularly true in the 1930’s, 1940’s, and 1950’s when the Sloane House was known for it’s queer sexual ambience as well as for being a gay social center and an entryway for new arrivals to into New York City’s gay world. “Indeed, the Y had such a reputation for sexual adventure that some New Yorkers took rooms at Sloane House for for the weekend, giving fake out-of-town addresses” (Chauncey 156). The neighborhoods around Sloane House and the automats, cafeterias, theatrical boardinghouses, bachelor apartments, and the amusement district and neighborhoods surrounding Times Square had developed into a gay enclave by the 1920‘s. “Many men working in the amusement district lived there as well, and they were joined by other gay men who appreciated the advantages of the transient housing the district offered” (Chauncey 302). These gay men not only worked and lived in the theater district, but they also socialized at the restaurants, cafeterias, theaters, clubs and bars in the area. “As in the Village, the eccentricity attributed to theater people and “artistic types” in general provided a cover for many men who adopted widely recognized gay styles in their dress and demeanor”(Chauncey 302).

The Depression and Prohibition brought many changes to  Times Square. To survive the devastating economic downturn of the Depression, some older Times Square theaters turned themselves into cheap movie houses or burlesque theaters. “The effects of Prohibition on the Square’s economy and moral tone were both more abrupt and more pervasive, and it helped make it possible for the gay presence in the Square to grow” (Chauncey 305). Many restaurants were forced out of business due to a major drop in profits from lost liquor sales on which most restaurants depended, and  many of these restaurants were replaced by the cheaper cafeterias and automats. The criminalization of liquor  not only forced the closing of many restaurants, it also drove nightlife underground into private speakeasies where illegal liquor was being served. The effect of these changes made  it harder to police what went on in the speakeasies. Many speakeasy operators made payoffs to the police or to crime syndicates for protection, so that they could remain open and avoid raids, harassment, or arrest. “All of these measures made it easier for establishments where gay men gathered to survive, because they made them stand out less. All speakeasies—not just gay speakeasies—had to bribe the authorities and warn their customers to be prepared to hide what they were doing on a moment’s notice” (Chauncey 306).

With the small and intimate private basement speakeasies becoming the only places where one could socialize  and buy liquor in New York City, the social boundaries between the classes, immigrants and minorities, and especially between men and women,  began to blur as they were all now commingling in the same space. “The speakeasies eroded the boundaries between respectability and criminality, public and private, and between commercial space and home life, for the hosts welcomed patrons into their basement hideaways as if into their homes, and encouraged them to mingle with the other guests and to spurn the conventions that normally governed their public behavior” (Chauncey 308). The  intimacy and privacy of the Times Square speakeasies transformed them into liminal spaces where people were able to let down their guard, flout social conventions, and fraternize with a diverse group of people with whom they might not normally have come into contact. This created an atmosphere that was more tolerant of gays and lesbians. “This aspect of Times Square’s appeal was only enhanced by the cultural developments of the Prohibition era. The popular revolt against the moral policing of Prohibition, the transformation of the square into a “tawdry” amusement district, and the incitement to transgression by the speakeasies themselves fomented a rejection of conventions  and an interest in the outré that both generated interest in pansies and made space for them” (Chauncey 308).

“Pansies”, also called “fairies”, were typically effeminate gay men who  dressed and behaved flamboyantly. Throughout the 1920’s in New York City, gay men became more visible and pansies could be found in the many different venues around Greenwich Village as hosts, personalities, and performers in speakeasies, nightclubs, cabarets, and revues.  “By the spring of 1930, as the Depression began to exact its toll on commercial leisure, the pansy and lesbian craze moved into the more mainstream nightspots of New York’s Times Square” (Heap 86). People began coming to Times Square to pose with, gawk at, or be entertained by the pansies on the streets and inside the clubs and theaters. Eventually, the pansies found their way onto Broadway stages alongside the female impersonators, and into pansy shows that opened in nightclubs across the country—some even appeared in movies. Some of the pansy performers and female impersonators became quite famous for their acts and performances,  and several performers opened pansy nightclubs in Hollywood. Some of these gay performers “…seized the opportunities Prohibition culture provided to expand the space available for gay self-representation and to challenge the conventions of ridicule and disdain that governed the straight world’s response to them”(Chauncey 329). Several of the better know pansy performers and female impersonators were Jean Malin, Bert Savoy, Julian Eltinge, Karyl Norman, and Bruz Fletcher. Also of note was the African-American lesbian Gladys Bentley, who performed as a naughty, butch women or ‘bulldagger’ in male drag at speakeasies and at  Harlem’s Ubangi Club,  backed by a chorus of drag queens (Heap 92).The Pansy Craze peaked in the early 1930’s in New York City and soon after in the rest of the country. Some of the clubs managed to survive into the 1950’s and early 1960’s with female impersonators and drag shows.

In order to use this area go to Appearance » Widgets tab in admin panel and select widget you want to use.

If you don't want to use widgets and use this page as full width you can disable blog widgets options under the Appearance » Theme Options » Posts menu.